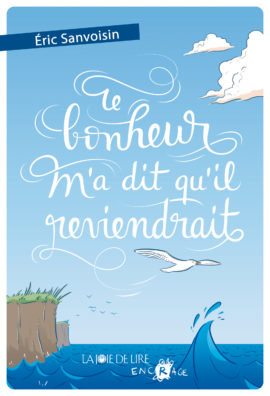 Happiness told me it would come back

Lune is a schoolgirl who suffers from prosopagnosia, a disorder that keeps her from recognizing, from one day to another, the faces of the people she meets, even if they are close parents or friends. A very incapacitating feature. Lune is always on the defensive, except with her friend Elsa, a young girl, living in a difficult part of town, described as “very tall and very fate”, whose mother is jobless and whose father is in prison. But this year, everything is better for Lune: she’s in love with her classmate Anton, a bird enthusiast. However, Anton has problem of his own. Bullied by Enzo, he’s completely petrified by fear every time Enzo approaches him. One evening, Anton invites Lune at a party at one of his friend’s. But he ends up betraying her, enabling Enzo to try and rape Lune. When Elsa finds this out, she beats Enzo up, breaking two of his ribs and a collarbone, which gets her expelled from school. When July arrives, the two girls decide to hike together along the coast of Brittany. An initiatory journey that will further strengthen the bond that unites them and will allow them to shed some light on their hazy future.

A text about difference, disability but also betrayal, harassment, which centers on two young girls of our time, both resourceful and fragile, brazen and touching.