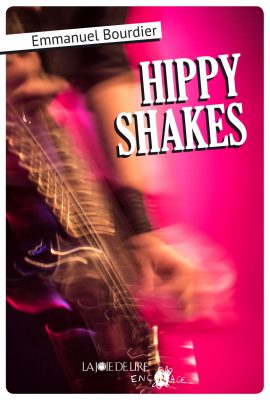 New Caledonia, today. Dani has gone missing. Where could he be? What happened to him? Dani is Pierre’s best friend and Pierre is very worried. The two of them were already inseparable in the 1960s. They are rock fans and had set up a band together, along with Jojo, Stanilas and Honoré: the Hippy Shakes! Their band is a unique adventure that has welded them together forever despite their strong personalities and their differences, and despite their sometimes complicated family situations.
This story navigates between two epochs, that of the sixties and that of the 2010s and alternates between the characters as teens and as grown-ups. But there’s only one soundtrack to it: wild rock ‘n’ roll! Music lovers will rejoice in this story that pulsates with timeless classic rock ‘n’ roll music. With the embedded QR code you can directly listen to these timeless hits online.
And then there is New Caledonia, a character on its own. A little known “rock” that Emmanuel Bourdier reveals to us little by little. The Hippy Shakes is a sweet and tender book on adolescence and the difficulties of becoming a man. Discover the shared destinies!