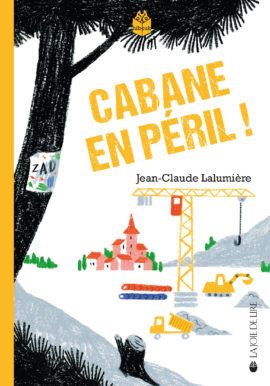 The little Bernard… Bernard, indeed: not easy to bear these days! The little Bernard, Bernie and his close relatives as well as his friends Félix, Pierre, Simon and Hugo have a huge problem: the construction of a highway near their town threatens to lead to the destruction of their cabin in the forest. A cabin that is so much more than a cabin, it’s a refuge, a sanctuary where girls are not allowed and where they meet after school to play four main games: pirates, Nazis’ hunters, star wars, superheroes. To prevent the disaster, the group wants to lure Zadistes to block the building side. After all it worked for the Notre-Dame des Landes’ airport!
They just have to find an environmental cause, an animal or a plant, even imaginary, that would be in mortal danger due to the construction of the highway. No sooner said than done, the children write handouts crying out scandal, the survival of the pines’ salamander is at stake… If that isn’t enough, they are ready for a fight and to stop the bulldozer from destroying their cabin.

Buy the book in ePub format